Haile Selassie I was known as a child as Lij Tafari Makonnen. Lij translates to ‘child’, and serves to indicate that a youth is of noble blood. His given name, Tafari, means ‘one who is respected or feared’. Like most Ethiopians, his personal name Tafari is followed by that of his father Makonnen and rarely that of his grandfather Woldemikael. His Ge’ez name Haile Selassie was given to him at his infant baptism and adopted again as part of his regal name in 1930. 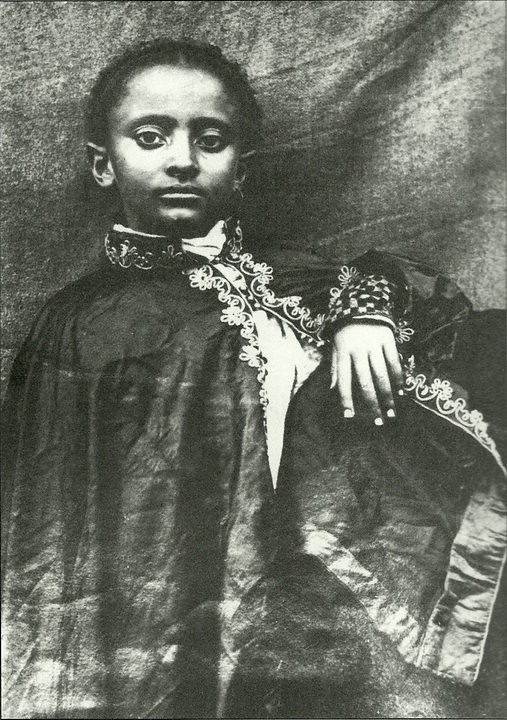 As Governor of Harer, he became known as Ras Tafari Makonnen. Ras translates to ‘head’ and is a rank of nobility equivalent to Duke; though it is often rendered in translation as ‘prince’. In 1916, Empress Zewditu I appointed him to the position of Balemulu Silt’an Enderase (Regent Plenipotentiary). In 1928, she granted him the throne of Shoa, elevating his title to Negus or “King”.

On 2 November 1930, after the death of Empress Zewditu, Ras Tafari was crowned Negusa Nagast, literally King of Kings, rendered in English as ‘Emperor’. Upon his ascension, he took as his regnal name Haile Selassie I. Haile means in Ge’ez ‘Power of’ and Selassie means trinity—therefore Haile Selassie translates to ‘Power of the Trinity’.

Haile Selassie’s full title in office was ‘By the Conquering Lion of the Tribe of Judah, His Imperial Majesty Haile Selassie I, King of Kings of Ethiopia, Elect of God’. This title reflects Ethiopian dynastic traditions, which hold that all monarchs must trace their lineage to Menelik I, who was the offspring of King Solomon and the Queen of Sheba.

To Ethiopians, Haile Selassie has been known by many names, including Janhoy, Talaqu Meri, and Abba Tekel. The Rastafari movement employs many of these appellations, also referring to him as Jah, Jah Jah, Jah Rastafari, and HIM (the abbreviation of ‘His Imperial Majesty’).

His coronation took place at Addis Ababa’s Cathedral of St. George. The coronation was by all accounts ‘a most splendid affair’, and it was attended by royals and dignitaries from all over the world. Among those in attendance were George V’s son the Duke of Gloucester, Marshal Franchet d’Esperey of France, and the Prince of Udine representing the King of Italy. Emissaries from the United States, Egypt, Turkey, Sweden, Belgium, and Japan were also present. British author Evelyn Waugh was also present, penning a contemporary report on the event, and American travel lecturer Burton Holmes shot the only known film footage of the event. One newspaper report suggested that the celebration may have incurred a cost in excess of $3,000,000.

Many of those in attendance received lavish gifts; in one instance, the Christian emperor even sent a gold-encased Bible to an American bishop who had not attended the coronation, but who had dedicated a prayer to the emperor on the day of the coronation.

Once His Imperial Majesty took his place on the throne, his holiness Abuna Kyrillos, the highest official in Ethiopia’s Coptic Christian Church, broke the solemn silence with the following decree:

Ye princes and ministers, ye nobles and chiefs of the army, ye soldiers and people of Ethiopia, and ye doctors and chiefs of the clergy, ye professors and priests, look ye upon our Emperor Haile Selassie the First, descended from the dynasty of Menelik the First, who was born of Solomon and the Queen of Sheba, a dynasty perpetuated without interruption from the time of King Sehale to our times. That God make this Crown a Crown of Glory. That, by the Grace and the blessing which we have given, you may have an Unshaken Faith and a Pure Heart, in order that you may inherit the Crown Eternal. So be it.