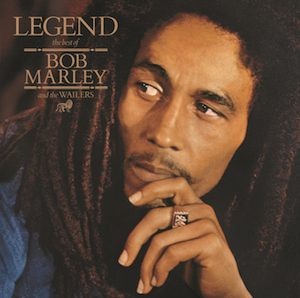 The compilation album Legend by BOB MARLEY AND THE WAILERS was released on 08 May, 1984 by Island Records. It is a greatest hits collection of singles in its original vinyl format and is the best-selling reggae album of all-time, with over 15 million copies sold in the United States and an estimated 28 million copies sold globally. As of December 2017, it had spent a total of 500 nonconsecutive weeks on the Billboard 200 album chart—the second longest run in history. Currently, the album sells approximately 3,000 to 5,000 US copies per week

On June 14, a double 180-gram vinyl reissue will be released that comprises the original “BMW1” version of Legend with the addition of two original U.K.-only cassette bonus tracks (“Easy Skanking” and “Punky Reggae Party”). Taken as a whole, the 16 songs that comprise Legend have literally defined a genre. Among the album’s instantly recognizable tracks are “Get Up Stand Up,” “One Love / People Get Ready,” “I Shot The Sheriff,” “Three Little Birds,” “Jammin,” and “Exodus.” Other Legend anthems like “No Woman No Cry” and “Is This Love” feature backing vocals from The I Threes, an all-female trio comprised of Marley’s wife Rita Marley, Judy Mowatt, and Marcia Griffiths.