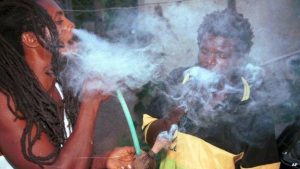 On March 01, 1996 a collective of Rastafarians descended on Kingston, Jamaica to demonstrate for the legalization of marijuana. The peaceful gathering chanted and indulged in the sacramental usage of herb, all under the watchful eye of the police. The event ended peacefully.

Cannabis was introduced to Jamaica in the mid 1800’s by Indian indentured servants that were imported when Great Britain ruled of both nations. Many terms used in the Jamaican Cannabis culture are of Indian origin, such as Ganja and Collie/Kali.

In 1913, the Ganja Law banned the use of Cannabis. It was championed by the white ruling class and the Council of Evangelical Churches in Jamaica. The laws grew ever harsher over time, specially in times where the authorities feared unrest in the lower classes.

It took until February 2015, for Jamaica’s legislature to amend the cannabis laws. They include: