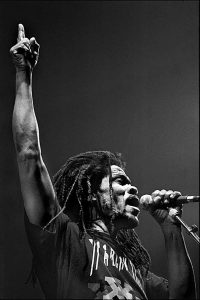 Albert Griffiths was born in St. Elizabeth, Jamaica on 01 January, 1946 and relocated to Kingston later on. After a series of unsuccessful recording auditions, he accepted a job as a mason; among his co-workers was Leonard Dillon, the frontman of the Ethopians, and together, the two singers convinced their employer Leebert Robinson to fund a recording session at the famed Studio One, with the resulting sessions yielding Griffiths’ debut “You Are the Girl, ” released as the flipside to the Ethiopians’ 1966 smash “Train to Skaville.”

Griffiths then enlisted David Weber and Errol Grandison to form the Gladiators, scoring a minor hit in 1967 with “The Train Is Coming Back”; singles including “Live Wire”, “Freedom Train” and “Hello Carol” followed before Weber exited in 1969, replaced soon after by Clinton Fearon.

Sessions with the inimitable Lee ‘Scratch’ Perry followed before the trio recorded their first LP, Presenting the Gladiators; Gallimore Sutherland replaced Grandison in 1973, and under producer Tony Robinson the group cut several classic albums of the period, including Trenchtown Mix Up and Proverbial Reggae. Early 1980s efforts including Symbol of Reality and Serious Thing preceded the Gladiators’ first U.S. tour in 1983; despite regular line-up changes Griffiths remained a staple of the group, navigating his way through a series of well-received releases on Heartbeat.

Albert passed away on 15 December, 2020 after having battled Parkinson’s disease for over a decade.