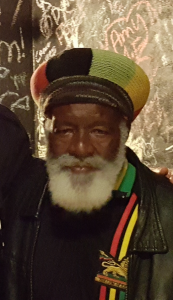 Neville Bernard Collins was born on 10 Nov, 1948 and was raised in Kingston although he also spent six years in Saint Catherine while his mother was working in London. In 1968, he formed the legendary trio The Abyssinians with Donald Manning and Lynford Manning. They are considered one of the quintessential Jamaican roots Reggae harmony groups responsible for such classics as “Satta Massagana” and “Declaration of Rights”.

Satta Massagana was recorded in 1969 for Clement ‘Coxone’ Dodd but he did not see any commercial potential in the song. The group purchased the master tapes in 9171 from Dodd for £90 and released it on their own label Clinch. The song became a massive hit and established their career as recording artists.

They recorded steadily throughout the 1970’s before internal conflicts saw Collins leaving the band to pursue a solo career in the 1980’s as Donald Abyssinian. There have been occasional reunions of the original members in later years.