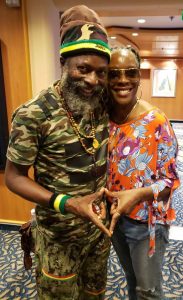 Clifton George Bailey III was born 13 April 1967 in St. Mary. As a youth, he was given the surname of a popular local lawyer, Capleton, as a nickname by his relatives and friends. He rejects the name given to him at birth and prefers “King Shango”, given its roots in the Yoruba language.

As a teenager, he would sneak out of his home to catch local dancehall acts, eventually leaving St. Mary for Kingston at the age of 18 to work on his career as a dancehall deejay. In 1989, he got his first big international exposure. Stewart Brown, owner of a Toronto-based sound called African Star, gave the untested artist his first break, flying him to Canada for a stage show alongside Ninjaman and Flourgon.

When Capleton first arrived on the scene in the late 1980s, slackness and gun talk were the dominant lyrics in the dancehalls. The pre-Rasta Capleton had a string of hit songs from “Bumbo Red” to “Number One on the Look Good Chart” and “No Lotion Man”.

He recorded the song that began to establish his significant place in Dancehall, “Alms House” in 1992. The tune became a big hit in the dancehall, followed up immediately by “Music is a Mission” and the massive hit “Tour”. By 1993, he was voicing tunes which became increasingly conscious, such as “Prophet” and “Cold Blooded Murderer”.

Tunes such as “Tour” and “Wings of the Morning” earned him a deal with Russell Simmons’ Def Jam Recordings, which culminated in the Prophecy and I-Testament albums of the mid-1990s. In 1999, Capleton headlined Reggae Sumfest’s dancehall night, to much fanfare. The performance, which led to a subsequent headliner placement the following year, is credited with “re-bussing”, or creating a comeback for, his career. The 1999–2000 period elicited a string of hits, many of which can be found on the album More Fire.

By 2004, some argued the quality of Capleton’s music had been downgraded by over-proliferation on numerous riddims, while Capleton himself argued his continued recording over both dancehall and roots reggae riddims created balance in his musical output. Nonetheless, he scored hit singles over one of the most popular riddims of 2004, “That Day Will Come” over the Hard Times riddim.

After a hiatus from the label, Capleton returned to VP Records in 2010 with the release of I-Ternal Fire. After headlining a U.S. tour which included Romain Virgo, Munga Honorable, and Kulcha Knox in the fall of 2010, Capleton embarked upon a tour of the African continent for late 2010 and early 2011. Stops included Gambia, Senegal, South Africa and multiple dates in Zimbabwe. In December 2012 the music Unite Cape Town International Reggae Festival saw Capleton, reggae and dancehall artists like Black Dillinger, Blak Kalamawi .

Capleton’s annual ‘A St Mary Mi Come From’ live show has raised funds for several charities since it was first staged in 2000, including local schools and hospitals.

Capleton makes reference to Bobo Ashanti, one of the various mansions of the Rastafari movement. Yet he frequently mentions there’s no separation between the mansions of Rastafari as he sees it. He stated in an interview on TraceTV that he doesn’t eat meat of any kind, consume dairy in any form, or even eat anything from soya. “Not an ordinary vegetarian…” he stated, “I’m vegan.” 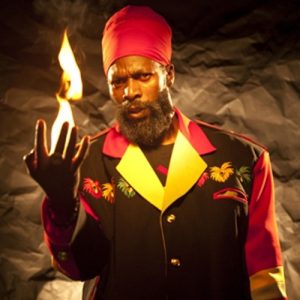 He also touches on the subject of his lyrics regarding fire, saying they are metaphoric references of purification, not violence or murder.