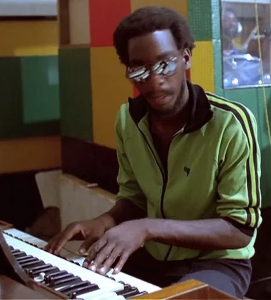 Earl Wilberforce Lindo was born 07 Jan 1953 in Kingston. While attending Excelsior High School in Jamaica, he played with Barry Biggs, Mikey “Boo” Richards, and Ernest Wilson in the Astronauts, and later played organ in the band Now Generation, and with Tommy McCook and the Supersonics, and the Meters. Aston “Familyman” Barrett heard Lindo and recommended him to play for a Saturday afternoon television program Where It’s At on JBC. Lindo also spent his early days working at Coxsone Dodd’s Studio One, where he played on innumerable recordings.

He was later recruited to join the Wailers for Burnin’; although not actually credited, his image is clearly featured on the original artwork. By 1974, Lindo had left the band to perform on keyboards with blues artist Taj Mahal. They recorded, among others, “Black Man Brown Man,” which was later recorded and released by Judy Mowatt.

In 1977, Lindo returned to Jamaica where he recorded with Big Youth, Culture, I Roy, and Al Brown. During his respite from the Wailers, he also released two solo hits, “No Soul Today” and “Who Done It.” Lindo rejoined the Wailers in 1978, and his playing skills were featured on Babylon by Bus, Survival, and Uprising.

He also appeared on the famed JBC film of Bob Marley’s solo acoustic performance of “Redemption Song.” Following Marley’s death in 1981, the band continued to perform as the Wailers Band, performing Bob Marley hits alongside the group’s own compositions. He remained with the group into the 1990s while also pursuing solo projects.

He died in a London hospital on 4 September 2017, aged 64, shortly after being admitted with abdominal pain. Among the tributes paid, Olivia Grange, Minister of Culture, Gender, Entertainment and Sport, described him as “an exceptionally gifted musician who played a pivotal role alongside Bob Marley and the Wailers in the global success of Jamaica’s reggae music.”