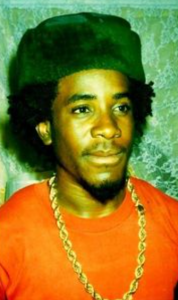 Half Pint was born Lindon Andrew Roberts on 11 Nov 1961 in West Kingston. He earned his future stage name early on for his small stature. His introduction to singing came in the school choir before he made his attempt at breaking into the music industry in the mid-70’s. He performed with different sound systems before getting a chance at recording with Prince Jammy in 1983. His debut single was called “Sally” and his first hit was called “Winsome”.

This was followed by a string of hits such as “Money Man Skank”, “One in a Million”, “One Big Family”, the socially conscious “Mr. Landlord,” and the all-time dancehall classic “Level the Vibes. He teamed up with Sly & Robbie on their Taxi Gang tour in 1985 and made several singles for them such as”Night Life Lady”, “Hold On” and “World Inflation.” Later that year, he released his signature song, “Greetings.