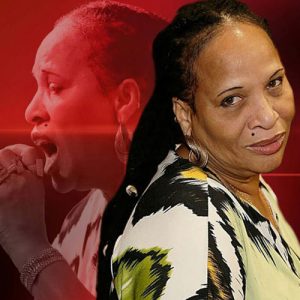 Ophlin Russell was born on 02 January 1962 in Kingston, Jamaica and was one of 15 siblings. Her elder brother, Robert, is better known as Brigadier Jerry, and by her mid-teens, she would occasionally perform on the Twelve Tribes of Israel Jahlovemuzik sound system and she worked for three years on the Stereophonic sound system with General Echo.

Sister Nancy was born in a conservative household in Kingston and was expected to perform conservative duties and promote socially conservative values such as staying in the household, be drug-free, and family oriented. Early on, she rebelled against her traditional values and followed her brother Brigadier Jerry in DJing. She was repeatedly dissuaded from DJing and encouraged to pursue Christian music by her father.

When she was a teenager, she got into Dancehall. She was the only girl to show up to dance. The family norms did not appeal to her and she ran away from home for months at a time. Nancy followed DJ Junior Chalice around Jamaica and in St. Thomas was given a chance by him to DJ. She is quoted from an interview as saying, “Me never nervous again after that. That was 15. When I was 16 I say, ‘Alright, I go step up me thing.'”

In 1980, producer Winston Riley was the first to take her into the studio, resulting in her first single, “Papa Dean” for his Techniques label. Russell-Myers went on to perform at Reggae Sunsplash, making her the first female deejay ever to perform there, and she is also the first female Jamaican deejay to tour internationally. She had further success with singles such as “One Two”, “Money Can’t Buy Me Love”, “Transport Connection” and “Bam Bam”. Her debut album, One Two was released in 1982. She went on to work with producer Henry “Junjo” Lawes, recording “A No Any Man Can Test Sister Nancy”, “Bang Belly”, and a collaboration with Yellowman, “Jah Mek Us Fe A Purpose”. She continued to appear live, sometimes on Jahlove Music with her brother. The sound system toured internationally, with both Sister Nancy and Brigadier Jerry making their debut UK performances at the Brixton Town Hall, London in 1982.

Despite his first album being released after hers, Sister Nancy claims her brother as her main inspiration and supporter. His stage presence and voice projection have clearly influenced Sister Nancy’s work and career. Aspects of his rolling vocal pattern, sing jay style, expressive performances, and culturally conscious lyrics are found in much of Sister Nancy’s music. Much like her brother, she also focuses on cultural issues and has a spiritual tone as well in many of her tracks. Unlike his sister however, Brigadier Jerry was never really able to capture his exceptional live performances on a recorded track that was on par. Today he still puts out the occasional single and tours somewhat regularly.

In 1996, she relocated to New Jersey. In an interview with The Jamaica Observer in 2002, Russell said that although she was working in the banking sector, that “music is [her] first love” and said she still performs “every now and then”. She explained that her absence from the recording scene was due to her wanting to “give other female artists a chance”, though she said she was still “as ready as the first day [she] came into the business”. The Observer cited Russell a role model for a successive generation of female acts, including Lady Saw, Sister Carol, Macka Diamond, Lady G, Shelly Thunder, Carla Marshall, Lorna G, Lady English, and Lady P.

In 2007, Russell released the second of her two albums, Sister Nancy Meets Fireproof, produced by djMush1, formerly of the Slackers (NYC Ska) on Special Potato Records. The album was distributed by Jammyland Records in New York, NY. The album features four original compositions, as well as four instrumental versions of the aforementioned songs.

In 2011, Sister Nancy did an interview where she stated that it’s harder now for women to make it in the field of music. When asked why, she said it’s because “Maybe because there weren’t so many female artists out and men respected the women.” This seems to agree with Cooper that dancehall music liberated women from “repressive respectability and conservative gender ideologies.” Rastawomen singers are free to act and say as they please on stage.

Upon its original release, “Bam Bam” never really caught on in Jamaica but has been a fixture in other genres of music ever since. While the song was originally recorded in 1966 by Toots and the Maytals, it is Sister Nancy’s version that is so often sampled in various genres. Beginning in 1991 with Main Source “Bam Bam” has been sampled in 73 songs – most recently Kanye West’s 2016 hit “Famous”. Nancy’s version uses Ansel Collin’s legendary 1977 instrumental “Stalag 17”, a well known riddim, alternatively known as a backing track used repeatedly.

In 2016 Sister Nancy retired from being a bank accountant in New Jersey so she could pursue music and performing. She recently played at Rebel Salute 2017 in Jamaica in January as well as played at Brooklyn Bowl in New York on 25 May 2017. In her interview with HOT 97 she stated that she plans to do more shows in the coming future.