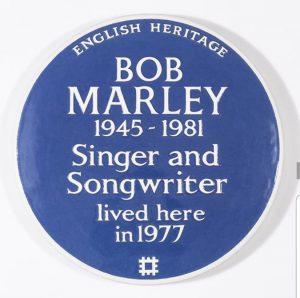 A blue heritage plaque honoring Bob Marley was unveiled Oct 01 at the London address where he and his band The Wailers lived and recorded in 1977. 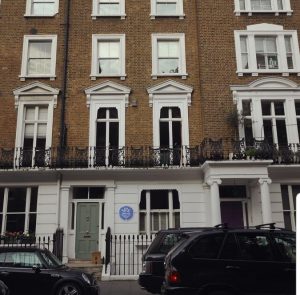 While living at 42 Oakley Street in Chelsea, Marley and his bandmates Bunny Wailer and Peter Tosh finished recording their album Exodus, which featured tracks including “Jamming”, “Three Little Birds” and “One Love”.

The plaque had been in the planning process for a long time, because Marley was not registered in phone directories or electoral registers – an issue which is common among historical figures of colour. Out of more than 900 blue plaques across London, only 4% are dedicated to black and Asian individuals.

In 2015, English Heritage, which manages more than 400 historic buildings and cultural sites across the country, established a working group to reinvestigate the addresses of noted ethnic minority figures.

Research by English Heritage revealed a court record of Marley’s arrest for cannabis possession in 1977. Though he gave a different address, it is speculated that Marley did so to prevent the police from searching the house in Oakley Street – where his bandmates were staying – for drugs. 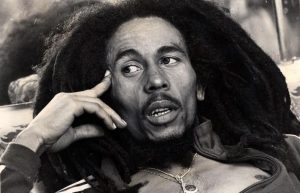 Other anecdotal reports from witnesses suggested the house was the band’s headquarters and Marley’s primary address. The plaque was unveiled by Rastafarian writer and poet Benjamin Zephaniah and introduced by historian and broadcaster David Olusoga, who is also a blue plaque panel member. 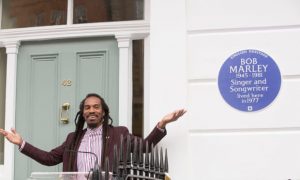 It’s very difficult to say what Bob Marley would have said about this plaque, but he did once say, ‘Live for yourself, you will live in vain, live for others, and you will live again’, so I’m quite sure he would say that this is for his people and his music.