Bounty Killer has accepted the distinction of “The Bob Marley of Dancehall Music” bestowed on him by one of his loyal fans who wrote on Instagram:

King Yellow Man, Beenie Man, Vybz Kartel the current king and one of the dancehall leading bredda, I want to make this clear and very clear, Bounty Killer is the Bob Marley, of Dancehall. There is no DJ on this planet do more for dancehall than Bounty Killer has done. Now this is not up for debate you dig. 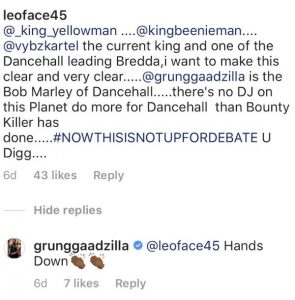 To which Bounty Killer responded:

Bounty Killer has been a force for decades putting dancehall music on the map outside of Jamaica and also making a large body of crossover hits with artists like Busta Rhymes, Fugees, No Doubt, Mobb Deep etc. He also brought to the fore some of dancehall’s biggest names such as Vybz Kartel, Elephant Man, Busy Signal and Mavado to name a few.

Despite this great body of work and influence, he does not garner the respect warranted from the current generation of dancehall artists. At the moment, there is friction between him and Mavado and the strained relationship with Vybz Kartel was only recently patched after years of feuding.