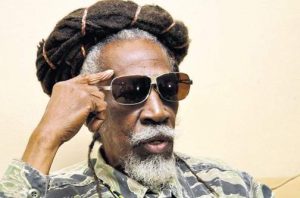 Bunny Wailer, who suffered a stroke at his home in Kingston in October 2018, has returned home from a 5-week rehabilitative treatment in Cuba. His manager, Maxine Stowe says he has responded well to therapy, however he must avoid any stress, so all performances have been canceled until 2020:

He’s improving but the speech is still impaired. The process is a whole re-training of the brain; it’s like going back to kindergarten. He’s totally functional in his understanding. All the signs are progressing, we just have to make sure he doesn’t get another one.

The stroke happened after the reggae icon returned home from visiting his Portland farm. He exhibited the classic signs of a stroke with slurred speech and a shift in his facial expression. The stroke occurred on the left side of his brain, which controls the right side of his body. His manager went on to say:

Thankfully, it was a minor stroke, so it was not as debilitating. Bunny never lost the ability to walk, eat and do other things, although initially, his body was weakened. His speech is the main consequence, and daily, it is coming back bit by bit.

Wailer remains active with projects he is passionate about. One of them is commissioning a statue of the three most famous Wailers: himself, Bob Marley and Peter Tosh. 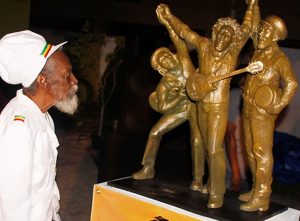 A maquette of the statue by Jamaican sculptor Paul Napier was unveiled in Kingston on December 14. It is scheduled for completion in October 2019.