CHRONIXX is paying homage to the late rapper Nipsey Hussle who was shot dead this weekend in front of his store Marathon Clothing in Los Angeles. He said he believes that artists that speak of conscious matters and of positivity are always always a target. He wrote on Instagram:

They put a program in the matrix to eliminate our people. We NEED to awaken to that truth or else. Plus…. the music industry pays big bucks to anyone who promotes self hatred and the death of the African…so big up to all the artistes out there playing games with these music corporations that make sure we have to throw away our inborn concepts and morals to earn a few bucks cause I’m not going down that road and the realest people won’t go down that street either.

Chronixx went on about the importance of building communities, much like Nipsey had been doing before his death.

We have to build projects of our own with positive intentions at the core of our works because a lot of people in the colonial projects are deeply sunken in the politics and evil of their “bosses/mayors/gang leaders/ministers etc. They spit at the idea of growing their own food and building their own world. So that’s a situation that requires super heroic qualities and is extremely dangerous for a conscious artist. So this vibe with NIPSEY is extremely heartbreaking to know that after more than 500 years in this western experience we still haven’t found the place in our consciousness to understand that what we need to be doing is LOVE AND PROTECT OUR people. OUR artistes. We shouldn’t shoot them.

Police have arrested the suspected shooter Eric Holder, 29 who pleaded not guilty to murder and attempted murder charges. Holder and Hussle, who knew each other, had several conversations throughout the day before Holder eventually returned with a handgun and shot Hussle, authorities allege. 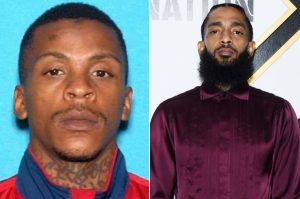 If convicted, Holder faces life in prison. Bail has been set to $5m.