The music industry has for years resurrected deceased artists through the use of holographic technology. It was used at the 2014 Billboard Awards to bring the late Michael Jackson back to the stage and is being planned to stage a tour with Whitney Houston.

Jamaican music industry front-man Joe Bogdanovich says that Jamaica has come close to having hologram-based concerts in the past, notably of late singers Bob Marley, Bunny Wailer and Peter Tosh:

We thought about it a bunch of times for Reggae Sumfest, we held negotiations and discussions and came very close to doing something with Bob Marley a number of years ago.

According to artiste manager Copeland Forbes, there were plans to have a holographic Marley perform alongside his former Wailer mates Tosh and the only living Wailer, Bunny, at London’s O2 arena in 2012. He said:

Bunny Wailer had the idea at that time to get a hologram of Bob and Peter beside him on the stage. It would have been good for the Jamaica 50th independence celebrations. we even had it set out, but then the funding for everything got a bit ridiculous. 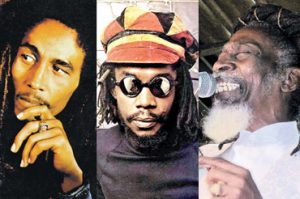 Information and communication technology lecturer Ssyade Gayle said that it could take a minimum of J$9 million to produce a hologram of a deceased artist and that while the idea of using holographic technology to stage concerts for late reggae artistes is not improbable in Jamaica, sourcing resources may prove tedious:

We would need to have the right software application and technologies to do this. I don’t believe the technical competencies are not in Jamaica for us to do that. We don’t have the resources, which is really the problem, but I believe it’s doable, and I wouldn’t be surprised if we don’t have that sort of technology already being explored. It’s not far-fetched. it’s just for someone to have the vision to make it happen and just get the right people in place.

He explained that holograms are essentially computer-generated illusions using algorithms to mimic attributes of the artiste:

Hologram technology is, basically, the use of light to project images to give you the illusion of you witnessing something real. In Whitney Houston’s case, they will probably use some of her video performances then different technologies to project light and give you the illusion as if she is performing live on stage. It’s similar in nature to the development of 3D characters. Advanced algorithms can take different attributes of the person, like their hands and height … and when all of that is put into an algorithm, it automatically generates an image and creates the illusion.

For Bogdanovich, the process to host hologram events would only be worth it if it was connected to a greater cause like a charity:

It’ll do more good that way, and maybe attract more support for sponsorship or investment, to give back to a community, perhaps a school, or enhance someone that can maybe build that computer lab with cutting-edge technology – just something that makes a difference. The technology is better now, so you’d have to bring in the right people for the right reasons as opposed to exaggerated financial reasons to make it work. These things need to be funded, to give opportunities to youth so they can get a piece of the pie, that’s the trick. There’s a lot that can happen in this country, and I think there are some people who are thinking about it and willing to go the distance and make it happen, and that is the key.