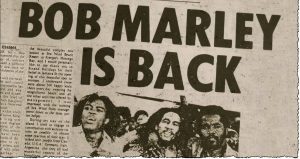 On February 26, 1978 Bob Marley returns to Jamaica for the first time after the assassination attempt on his life on December 3, 1976. An Air Jamaica flight carrying him touched down a few minutes before 5:00 p.m. at Norman Manley Airport in Kingston where thousands of fans greeted him. Several hours later, Bob opened an informal free session at the National Heroes Circle Stadium.