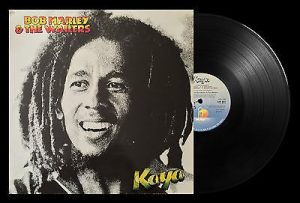 Kaya is the tenth studio album released by Bob Marley and the Wailers. Exodus was still on the UK chart when its follow-up Kaya was released on 23 March, 1978. This was a testament not only to Bob Marley’s phenomenal popularity at this point but also to the man’s impressive work ethic and his ability to shrug off the worsening health problem with Acral Melanoma, a malignant skin cancer. The album was recorded concurrently with the tracks released on the Exodus album in 1977.

The album did not have the usual lyrical and musical militancy, and received some critique for ‘going soft’ as the songs primarily revolved around love and marijuana. Marley retorted:

“I was in the camp and there was no war.”

The album’s release coincided with the One Love Peace Concert and Marley’s triumphant return to Jamaica from his self-imposed exodus in London following the assassination attempt in December of 1976 at his Kingston homestead. Kaya reached the top five in the UK album charts.

While in London, Marley was arrested and charged with possession of cannabis. He appeared at Marylebone Magistrates Court on 4 June 1977 where he was found guilty and fined £50. Kaya was an eloquent riposte to the UK law enforcement agencies, whose sanctions had clearly not discouraged Marley from smoking herb.

The album was recorded with The Wailers that comprised brothers Carlton and Aston “Family Man” Barrett on drums and bass, Tyrone Downie on keyboards, Alvin “Seeco” Patterson on percussion, and the I Threes — Rita Marley, Marcia Griffiths, and Judy Mowatt , along with newest member Julian (Junior) Marvin on guitar.

Two of Kaya’s songs had previously appeared in different arrangements on 1971’s Soul Revolution: “Kaya” and “Sun Is Shining”.