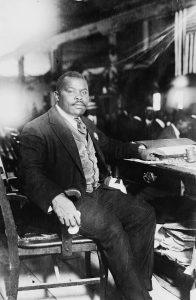 On March 24, 1916 Marcus Garvey arrived in the Untied States on the SS Tallac following correspondence with Boooker T. Washington, head of the Tuskegee Institute in Alabama and a national African-American leader in the United States. His intention was to make a lecture tour and to raise funds to establish a school in Jamaica modeled after Washington’s Institute. Garvey visited Tuskegee, and afterwards, visited with a number of black leaders. Throughout his life, Garvey and the UNIA used the organization’s resources to give people of African descent opportunities in academics that he felt they wouldn’t be provided otherwise.