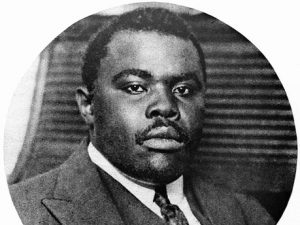 February 27, 1923 Marcus Garvey speaks at Carnegie Hall for UNIA, Universal Negro Improvement Association, on “The Future of the Black and White Races – The Building of a Negro Nation”. Garvey said not to adopt an attitude not of hostility to other races and peoples of the world, but an attitude of self-respect and manhood rights on behalf of 400,000,000 Negroes of the world.” In his introductory remarks, master of ceremonies William H. Ferris summed up the impact of Garvey’s movement on his contemporaries, saying “the UNIA has swept the world like a tidal wave. No movement since Abraham Lincoln has so electrified the Negro race.”