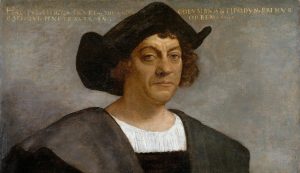 On May 5, 1494 the Italian explorer Christopher Columbus, under the auspices of the Spanish Crown, set foot on the island of Jamaica. The event occurred on his second voyage to the West Indies. He had heard about Xaymaca, from the Cubans who described it as “the land of blessed gold”. Columbus was soon to find out that there was no gold in Jamaica.

On arrival at St Ann’s Bay, Columbus was greeted by hostility from the native Arawak Indians who attacked his men when they tried come ashore. As he was determined to annex the island in the name of the King Ferdinand and Queen Isabella, he was not deterred. Columbus also needed wood and water and a chance to repair his vessels. He continued on down the coast and docked at Discovery Bay. The Arawaks there were also hostile but surrendered when they were attacked by a shower of arrows from Spanish cross-bows. Columbus was then able to land and claim the island accordingly. History recounts unspeakable acts of cruelty committed by Columbus and his men; rape, slavery, mutilations, murder.

The Caribbean indigenous Arawak and Taíno people are believed to have numbered in the millions at the point of contact with Columbus. Through warfare and harsh enslavement by the colonists the population was decimated, but most scholars believe that it was the European diseases that caused the majority of deaths as the natives had little to no immune defense against these new illnesses. A smallpox epidemic in Hispaniola in 1518–1519 killed almost 90% of the surviving Taíno.

The decrease in native slaves set in motion the African trans-Atlantic slave trade.