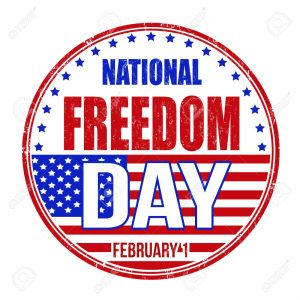 National Freedom Day is a United States observance on February 1 honoring the signing by Abraham Lincoln of a joint House and Senate resolution that later became the 13th Amendment to the U.S. Constitution. President Lincoln signed the Amendment outlawing slavery on February 1, 1865, although it was not ratified by the states until later.

Major Richard Robert Wright Sr., a former slave, believed that there should be a day when freedom for all Americans is celebrated. Wright invited national and local leaders to meet in Philadelphia to formulate plans to set aside February 1 each year to memorialize the signing of the 13th Amendment to the U.S. Constitution by President Abraham Lincoln on February 1, 1865, which freed all U.S. slaves.[1] One year after Wright’s death in 1947, both houses of the U.S. Congress passed a bill to make February 1 National Freedom Day. The holiday proclamation was signed into law on June 30, 1948, by President Harry Truman. It was the forerunner to Black History Day and later Black History Month, officially recognized in 1976, though begun by Carter G. Woodson in 1926.

The President may issue each year a proclamation designating February 1 as National Freedom Day to commemorate the signing by Abraham Lincoln on February 1, 1865, of the joint resolution adopted by the Senate and the House of Representatives that proposed the 13th amendment to the Constitution.

On this day many towns have festivals, while other citizens reflect on the freedoms that the United States honors and to appreciate the goodwill of the United States. Wreath-laying at the Liberty Bell has also been a tradition to mark National Freedom Day for many years. Symbols of the day may include a theme about freedom for all Americans.