April 22, marks the anniversary of the 1978 One Love Peace Concert at The National Stadium in Kingston, Jamaica.

The concert was an attempt at uniting the political warring factions of the Jamaican Labor Party (JLP) and The People’s National Party (PNP).

Since Michael Manley (JLP) was elected Prime Minister of Jamaica in 1972, he pursued a socialist agenda intended to redistribute wealth by nationalizing the country’s major export industries. This deterred foreign investment in Jamaica and made the economy suffer. Manley was also aggressively opposed by the CIA and American business interests. Beginning in 1974, the rift between him and the conservative Edward Seaga (PNP) resulted in the two politicians hiring local gangsters to help them increase their hold on power.

Ironically, the idea for the One Love Peace Concert came from two such gangsters from rival political factions, who happened to be locked up in the same jail cell together and who both wanted to alleviate the violence. Claudius ‘Claudie’ Massop (JLP) and Aston ‘Bucky’ Marshall (PNP) decided that the best means to bring the country together was to use music as a uniting factor and organize a major concert. They quickly realized that Bob Marley, who was living in exile in London following the assassination attempt in 1976, was a critical element for the success of their idea. Once Massop was released from prison, he flew to London to convince Marley to perform at the event. Marley accepted.

The concert showcased 16 of Reggae’s top acts of the day and the media dubbed the event the “Third World Woodstock”, “Bob Marley Plays for Peace” and “Bob Marley is Back.” Some 32,000 spectators attended the show and the proceeds were aimed at alleviating the issues of sanitation and housing in impoverished West Kingston.

The concert commenced at 5:00 PM with a message from Ethiopia’s crown prince, Asfa Wossen, who praised the efforts to restore peace in Jamaica. The concert was structured into two halves, with the first half devoted to newer talent and the second half devoted to the established artists.

Jacob Miller launched the second half of by leaping from the stage with lighted marijuana joint and offering it to a police man. He donned the lawman’s helmet, jumped back onto the stage and continued to perform. Then Peter Tosh took the opportunity during his set to berate the two political leaders sitting directly in front of him for their positions against legalizing marijuana and for the problems prevalent in society.

At around 12:30 AM, Bob Marley took the stage and performed some of his biggest hits. The climax came during his performance of Jammin’ when he called both Manley and Seaga onstage and put their three together over his head in a symbolic gesture of unity. 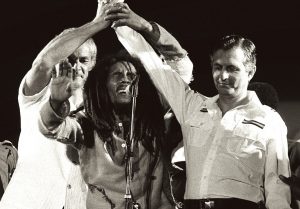 Unfortunately, the event did little to quell the political violence. The event’s two organizers, Massop and Marshall were both killed within two years after the concert. The following election year in 1980 would see 889 reported murders in Jamaica, over 500 more than the previous year.