Jamaican film-maker and novelist Perry Henzell was born on March 7, 1936, in St. Mary, Jamaica. His most famous work was directing of the first Jamaican feature film, “The Harder They Come” in 1972, starring Jimmy Cliff. 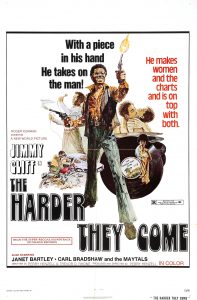 Henzell grew up in the parish of St. Catherine in Jamaica on the Caymanas sugar cane estate.  At 14, he was sent for formal education in England at the Shrewsbury School. He then attended university in Montreal but dropped out to hitchhike around Europe where he became interested in the film industry. The led him to seek jobs as a director in the United Kingdom and also working as a stagehand for the BBC.

On his return to Jamaica in the 50s, he sought employment in advertising where he began producing and directing commercials.  His work was described as groundbreaking in that it featured the “authentic Jamaican culture”. After producing over 200 commercial he began working on “The Harder They Come” with co-writer Trevor D. Rhone.

Plot:
Ivanhoe Martin (Jimmy Cliff) arrives in Kingston, Jamaica, looking for work and, after some initial struggles, lands a recording contract as a reggae singer. He records his first song, “The Harder They Come,” but after a bitter dispute with a manipulative producer named Hilton (Bob Charlton), soon finds himself resorting to petty crime in order to pay the bills. He deals marijuana, kills some abusive cops and earns local folk hero status. Meanwhile, his record is topping the charts.

Shortly after completing “The Harder They Come”, Henzell shot some footage for his next film “No Place Like Home” but could not finish it due to financial issues. He wrote his first novel, “Power Game”, in 1982 followed by the novel “Cane” in 2001. He also produced a theater musical in 1988 based on the life of Marcus Garvey which ran at the Ward Theatre, Kingston, Jamaica.

Perry Henzell died on November 30, 2006, in Treasure Beach, St Elizabeth, Jamaica.  The Jamaican premiere of his second film “No Place Like Home (2006)”, which was finished almost 30 years after he began filming,  took place the day after his death.