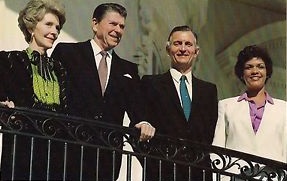 On 07 April, 1982 US President Ronald Reagan arrived in Jamaica for a two-day state visit with Prime Minister Edward Seaga. The Rastafarian community held a longstanding adversarial position to Ronald Reagan, partly due to Reagan’s interventionist policies in the region, partly because of their distrust of the CIA and its rumored involvement in the assassination attempt on Bob Marley in December, 1976 and partly because of what they read into the number of letters in Reagan’s full name: Ronald Wilson Reagan – six letters in each name = 666.

A Grounation was held and recorded on the album “Churchical Chants” of the Nyabinghi. President Reagan and Pope John Paul II received a verbal lashing:

This was the first time a Grounation ceremony had been recorded.