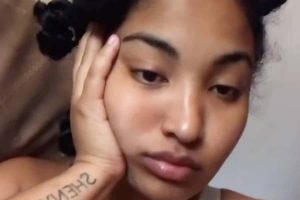 Shenseea shared news online regarding the voice issues that have been plaguing the female Dancehall artist lately:

Hey guys a know a lot of ya’ll been hearing me complaining that i’ve been sick for quite some time now cause it seems to be forever in my book. I haven’t been able to sing a song properly or anything… on my shows you can hear my voice leaving in the middle of my set.

Initially she was not taking her vocal troubles seriously as the symptoms tended to ease after a few days rest but it has been been ongoing for a month now. She said she cannot even deejay which is easier on her voice box than singing.

Her doctor diagnosed her with a mild vocal cord trauma and advised her to stop from performing right away and to take medication and rest for two weeks or her condition could worsen and end her career.

Haven’t been able to record a song in 4 weeks and because i been non stop pushing it my voice started to fail me whilst on stage performing cuz i really wasn’t taking it seriously. I really don’t wanna get to the point where i have to do surgery or lose my voice completely so I have no choice but to be canceling some of my shows … and unfortunately London and Birmingham are 2 of the locations, sorry for the inconvenience this may have caused cuz I too am disappointed. I would work all the time if i could but my voice will not let me continue so i’m being forced to rest…

She expressed her disappointment at having to cancel upcoming shows in England and asked her fans to pray for her because the situation is serious.
Sharing Is Caring!!