We are less than 24 hours before Mark Anthony Myrie aka Buju Banton steps on stage for the first time since his release from prison in December. Donovan Germain, Penthouse Records founder and Buju’s mentor, said:

He is looking forward to it (the concert). He is in good spirits and excited to interact with those who support him. I don’t think he is nervous. This is something he has been doing all his life. The people that are there will be fans and well-wishers, so he is excited to connect with them The rehearsals have gone exceptionally well. We rehearsed for four hours, four days a week. Now, he’ll be taking the rest of the time to get the rest he needs.

Though he has been absent from the lime light for nearly 10 years, serving a prison sentence in the United States, Germain said Buju has shown no signs of nervousness and will headline the show, dubbed “Long Walk to Freedom”, at the National Stadium in Kingston on Saturday, March 16, 2019. 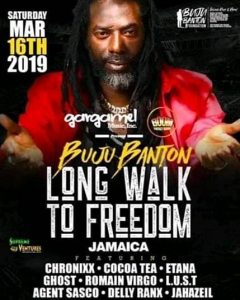 Joining Buju on stage will be Chronixx, Cocoa Tea, Etana, Ghost, Romain Virgo, L.U.S.T, Agent Sasco, Delly Ranx and Buju’s son Jahaziel. The event will be backed by A-level musicians, some from Buju’s past, including musical director Steven “Lenky” Marsden of “Til Shiloh Band” fame.

Reggae In Seattle will be on site to report on what is predicted to become one of the biggest musical events in Jamaican history.