On 28 August 1975, the Ethiopian state media reported that Emperor Haile Selassie had died on 27 August of “respiratory failure” following complications from a prostate examination followed up by a prostate operation. Dr. Asrat Woldeyes denied that complications had occurred and rejected the government version of his death. The prostate operation in question apparently had taken place months before the state media claimed, and Selassie had apparently enjoyed strong health in his last days.

In 1994, three years after the military socialist Derg regime was overthrown, an Ethiopian court found several former military officers guilty of strangling the Emperor in his bed. The court charged them with genocide and murder, claiming that it had obtained documents attesting to a high-level order from the military regime to assassinate Selassie for leading a “feudal regime”. Documents have been widely circulated online showing the Derg’s final assassination order and bearing the military regime’s seal and signature. The veracity of these documents has been corroborated by multiple former members of the military Derg regime.

The Soviet-backed PDRE fell in 1991. In 1992, Selassie’s bones were found under a concrete slab on the palace grounds, though some reports suggest that his remains were discovered beneath a latrine. Selassie’s coffin rested in Bhata Church for nearly a decade, near his great-uncle Menelik II’s resting place. On 5 November 2000, the Ethiopian Orthodox church gave him a funeral, but the government refused calls to declare the ceremony an official imperial funeral. 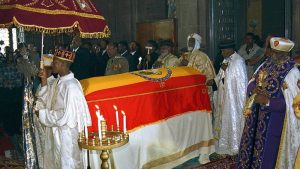 Prominent Rastafari figures such as Rita Marley participated in the funeral, but most Rastafari rejected the event and refused to accept that the bones were the remains of Selassie. There is some debate within the Rastafari movement whether he actually died in 1975. 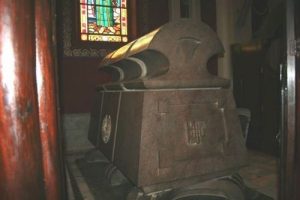