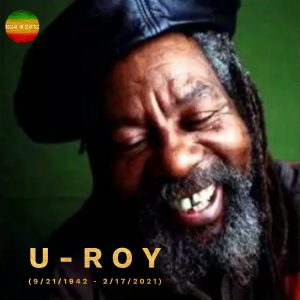 Ewart Beckford aka The Originator U-Roy was born in Jones Town, Saint Andrews Parish, Kingston, Jamaica, on 21 September 1942. His family was musical, his mother performing in the choir at a local Seventh-Day Adventist church. He first DJed at the tender age of 14.

“My mother used to say to me: Why don’t you trim and shave because you will look a much nicer boy?” “And I used to say, ‘Listen mum, I did not tell you not to be a Seventh-Day Adventist. I did not tell you not to play that organ on that choir. I’m going to do what I have to do and I’m not going to disrespect you. But what I believe in is what I believe in.”

His artist name of U-Roy originated from a younger family who found it difficult to pronounce his first name. His professional DJ career started in 1961 on Dickie Wong’s sound system and later on Sir George the Atomic sound system. He was given and chance to run the number two set for Sir Coxsone Dodd’s sound system while King Stitt “The Ugly One” ran the main set. Following this was a period with Sir Percy and then King Tubby’s Hometown Hi-Fi sound system.

U-Roy’s first single “Dynamic Fashion Way” came in 1969 and was produced by Keith Hudson. In 1970, Paragon singer John Holt heard U-Roy at a dance toasting over a Duke Reid track and was so impressed he told Reid about the performance. On this recommendation Reid asked U-Roy to come and see him and an informal recording deal was arranged.

His first two singles on Duke Reid’s Treasure Isle label were the classics “Wake the Town” and “Wear You to the Ball”. They became Jamaican hits and cemented him as one of Jamaica’s most popular toasters. He went on to work with other major producers such as Lee “Scratch” Perry, Bunny Lee, Phil Pratt, Sonia Pottinger, Rupie Edwards, Alvin Ranglin and Lloyd Daley.

1975 saw the release of the album Dread in a Babylon in the US, Europe and Jamaica. It achieved significant sales in the UK. The track “Runaway Girl” from the album was released as a single in Europe that same year. The success of Dread in a Babylon led to a series of Tony Robinson produced albums: Natty Rebel (1976), Rasta Ambassador (1977) and Jah Son of Africa (1978).

U-Roy was now reaching the peak of his power. His toasts were utterly relaxed and conversational, yet always in perfect synchronicity with the rhythms. The DJ had gained a significant following in the UK and in 1976 toured Britain for the first time. He performed at the London Lyceum, backed by the always excellent Revolutionaries, and the 1978 Live EP was drawn from this phenomenal show. Back in Jamaica, U-Roy began recording his new album, Rasta Ambassador, filling the studio with musicians and singers, 15 strong in all. The Gladiators provided particularly sonorous backing vocals, while the band, led by the rhythm team of Sly & Robbie, created a deep roots sound appropriate to the album’s title.

In 1978 U-Roy started his own sound system Stur Gav while also continuing to run his own labels, Del-Ma and Mego-Ann, which the DJ had set up a few years back. 1978 brought a new album, Jah Son of Africa, arguably U- Roy’s best. Again, a deeply rootsy outing; with a superb supporting cast (this time the Gladiators were joined by Ken Boothe), the album showcased the DJ at his cultural height. It was to be his final album for Virgin.

In the runup to the 1980 election, Stur-Gav fell victim to the violence that swept Jamaica and the sound system was destroyed. Undeterred, U-Roy relaunched it the following year and brought in new DJs, including up and coming stars Josey Wales and Charlie Chaplin.

In 1982, he appeared at Reggae Sunsplash for the first time and a song from his powerful set can be heard on the Best of Festival — Day One compilation. In 1983, the DJ was behind the superb King Stur-Gav Hi Fi Lee Unlimited album, a live session recorded at his own sound system that featured a clutch of crucial DJs from Dillinger to the young Beenie Man, his two favorite protégés Charlie Chaplin and Josey Wales, as well as U-Roy himself. The follow-up, King Stur-Gav Sounds Live at Clarendon J.A., amazingly doesn’t feature U-Roy at all, except in the capacity of selector. The next year brought the excellent “Hustling” single, cut for producer Gussie Clarke, “Get Ready” recorded for Ossie Thomas, and a return engagement at Reggae Sunsplash that year, with a second appearance in 1985.

While active as a performer in the 1980s, U-Roy scarcely recorded again until 1991 – by which time he had moved to LA – when the British producer Mad Professor invited him to appear on the album True Born African. It spawned another lasting creative partnership. U-Roy’s last album, 2018’s Talking Roots, was also produced by Mad Professor. “From I was 15 when I heard Version Galore I wanted to work with U-Roy,” Mad Professor tweeted on Thursday.

He was featured on the album True Love by Toots and the Maytals, which won the Grammy Award in 2004 for Best Reggae Album. In 2007 he was awarded the Order of Distinction by the Jamaican government for his contribution to music. 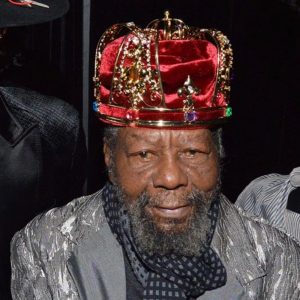 In 2019 he was “crowned” by Shabba Ranks in New York, who called him “di Picasso of our music”. That year he also recorded a new album, Gold: The Man Who Invented Rap, featuring Sly and Robbie, Zak Starkey on guitar and Youth of Killing Joke on production, with guest appearances from Mick Jones of the Clash, Santigold, Shaggy and Ziggy Marley among others. A release date is planned for the summer.

U-Roy was not the first toaster but he became known as “The Originator” for being the first to put his distinctive vocal style on record, birthing a phenomenon and inspiring the creation of hip-hop. On the other side of the Atlantic DJ Kool Herc and Coke La Rock took the approach of U-Roy and the Kingston sound to their Bronx parties to distinguish them from the mid-70s disco scene, extemporizing over Space Echo and inventing their own slang. Kool Herc’s Bronx apartment block would come to be recognized as the birthplace of hip-hop.

Reflecting on his message, U-Roy said: “I just talk about unity with people. I don’t really try to put down people or anything like that. Violence is very ugly and love is very lovely. I never been to college or anything like that, but I have some common sense, and what I learn I just make the best of it, you know.”