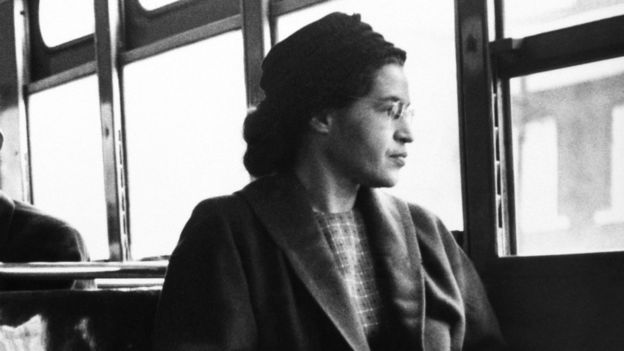 After working all day, Parks boarded the Cleveland Avenue bus, a General Motors Old Look bus belonging to the Montgomery City Lines, around 6 p.m., Thursday, December 1, 1955, in downtown Montgomery. She paid her fare and sat in an empty seat in the first row of back seats reserved for blacks in the “colored” section. Near the middle of the bus, her row was directly behind the ten seats reserved for white passengers. Initially, she did not notice that the bus driver was the same man, James F. Blake, who had left her in the rain in 1943. As the bus traveled along its regular route, all of the white-only seats in the bus filled up. The bus reached the third stop in front of the Empire Theater, and several white passengers boarded. Blake noted that two or three white passengers were standing, as the front of the bus had filled to capacity. He moved the “colored” section sign behind Parks and demanded that four black people give up their seats in the middle section so that the white passengers could sit. Years later, in recalling the events of the day, Parks said, “When that white driver stepped back toward us, when he waved his hand and ordered us up and out of our seats, I felt a determination cover my body like a quilt on a winter night.”

By Parks’ account, Blake said, “Y’all better make it light on yourselves and let me have those seats.” Three of them complied. Parks said, “The driver wanted us to stand up, the four of us. We didn’t move at the beginning, but he says, ‘Let me have these seats.’ And the other three people moved, but I didn’t.” The black man sitting next to her gave up his seat.

Parks moved, but toward the window seat; she did not get up to move to the redesignated colored section. Parks later said about being asked to move to the rear of the bus, “I thought of Emmett Till and I just couldn’t go back. “Blake said, “Why don’t you stand up?” Parks responded, “I don’t think I should have to stand up.” Blake called the police to arrest Parks. When recalling the incident for Eyes on the Prize, a 1987 public television series on the Civil Rights Movement, Parks said, “When he saw me still sitting, he asked if I was going to stand up, and I said, ‘No, I’m not.’ And he said, ‘Well, if you don’t stand up, I’m going to have to call the police and have you arrested.’ I said, ‘You may do that.'”

During a 1956 radio interview with Sydney Rogers in West Oakland several months after her arrest, Parks said she had decided, “I would have to know for once and for all what rights I had as a human being and a citizen.” 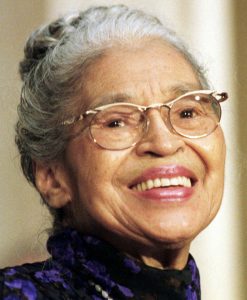 In her autobiography, My Story, she said:

People always say that I didn’t give up my seat because I was tired, but that isn’t true. I was not tired physically, or no more tired than I usually was at the end of a working day. I was not old, although some people have an image of me as being old then. I was forty-two. No, the only tired I was, was tired of giving in.

When Parks refused to give up her seat, a police officer arrested her. As the officer took her away, she recalled that she asked, “Why do you push us around?” She remembered him saying, “I don’t know, but the law’s the law, and you’re under arrest.” She later said, “I only knew that, as I was being arrested, that it was the very last time that I would ever ride in humiliation of this kind. … ”

Parks was charged with a violation of Chapter 6, Section 11 segregation law of the Montgomery City code, although technically she had not taken a white-only seat; she had been in a colored section. Edgar Nixon, president of the Montgomery chapter of the NAACP and leader of the Pullman Porters Union, and her friend Clifford Durr bailed Parks out of jail that evening.

Parks did not originate the idea of protesting segregation with a bus sit-in. Those preceding her included Bayard Rustin in 1942, Irene Morgan in 1946, Lillie Mae Bradford in 1951, Sarah Louise Keys in 1952, and the members of the ultimately successful Browder v. Gayle 1956 lawsuit (Claudette Colvin, Aurelia Browder, Susie McDonald, and Mary Louise Smith) who were arrested in Montgomery for not giving up their bus seats months before Parks.