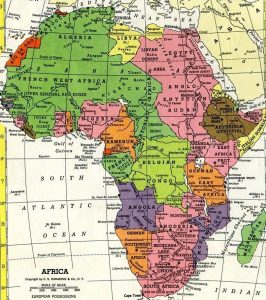 On the African continent, only two nations, Ethiopia and Liberia, were never colonized by a European power in the 19th-century “Scramble for Africa.” Liberia was founded by freed African-American slaves with the help of the the American Colonization Society’s “Back to Africa” movement. The connection to the United States made Liberia unattractive as a target for European colonial efforts.

Ethiopia, also known as Abyssinia, on the other hand was an ancient Empire, tracing its history back thousands of years chronologically and further still to the origins of humanity. It was attacked twice by Italy, once in the 1890’s and once under Benito Mussolini’s fascist regime just prior to WWII when it was briefly occupied but never colonized. 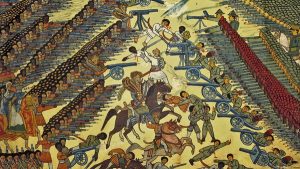 The Battle of Adwa was the deciding battle of the First Italo-Ethiopian War. Led by Emperor Menelik II, Ethiopian forces defeated the invading Italian force on March 1, 1896, near the town of Adwa in Tigray. 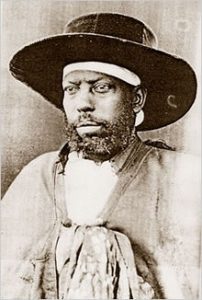 The decisive victory thwarted the Kingdom of Italy’s campaign to expand its colonial empire in the Horn of Africa and secured the Ethiopian Empire’s sovereignty for another forty years. As the only African nation to successfully resist European conquest during the scramble for Africa, Ethiopia became a preeminent symbol of the pan-African movement and international opposition to colonialism. 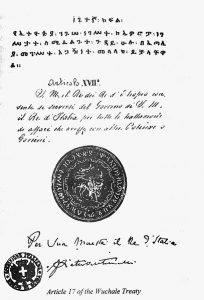 In 1889, the Italians signed the Treaty of Wuchale with Menelik, which ceded territories previously part of Ethiopia. In return, Italy promised Menelik II’s rule, financial assistance and military supplies. A dispute later arose over the interpretation of the two versions of the document. The Italian-language version of the disputed Article 17 of the treaty stated that the Emperor of Ethiopia was obliged to conduct all foreign affairs through Italian authorities. This would in effect make Ethiopia a protectorate of the Kingdom of Italy. The Amharic version of the article however stated that the Emperor could use the good offices of the Kingdom of Italy in his relations with foreign nations if he wished. However, the Italian diplomats claimed that the original Amharic text included the clause and that Menelik knowingly signed a modified copy of the Treaty.

The Italian government decided on a military solution to force Ethiopia to abide by the Italian version of the treaty. As a result, Italy and Ethiopia faced off in what was later to be known as the First Italo-Ethiopian War.