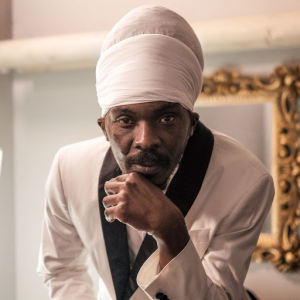 Keith Blair aka “Anthony B” was born 31 March 1976 in Trelawny, Jamaica. His deeply religious family life (his mother was a Seventh-day Adventist and his grandmother a Revivalist) imbued him with a profound spirituality. During his youth, his favorite singers were reggae legends Bob Marley and Peter Tosh, musicians who strongly influenced his own style. Peter Tosh’s influence can definitely be heard in Anthony B’s vocal delivery and revolutionary stance.

Anthony B adopted Rastafari movement beliefs as a teenager and joined the mansion of Bobo Ashanti, a decision which was not well received by his family. The stubborn and determined Anthony B refused to give up his new religion and his dreadlocks and moved to the home of his aunt and uncle in the Kingston suburb, Portmore.

While attending high school, Anthony B debuted as a deejay for the local sound system, Shaggy Hi-Power. In 1988, he befriended reggae artists such as Determine, Mega Banton, Ricky General and Terror Fabulous. At this point in the reggae industry, singing “slack” songs about women was the popular thing to do. Anthony B did not believe in degrading women and chose to pen politically slanted songs instead. He collaborated with Little Devon and made his debut single “The Living is Hard” on the Wizard label in 1993. Anthony B tried many different producers before joining with Richard Bell, creating hits such as “Fire Pon Rome”, “Raid Di Barn”, “Rumor”, and “Repentance Time”.

In January 2013, he was charged with possession of marijuana with intent to distribute after being stopped in Georgia, United States due to illegally tinted windows in the vehicle in which he was travelling. He subsequently had to cancel several shows in South America as he was not allowed to travel outside the US.

In July 2013 he released Tribute to Legends, an album of cover versions of songs by artists such as Bob Marley, The Maytals, John Lennon, Ray Charles, Elvis Presley, and Ini Kamoze. Speaking of the album, he stated “I chose to make a tribute album to firstly show how much these legends influence my music and my life.”

Anthony B tours extensively with Jason Sese in Europe and North America. He has collaborated with singer-songwriter and producer Emmanuel Anebsa, who we featured on Reggae In Seattle in our “Featured Artist” segment.

Talking of his faith and music, Anthony B commented, “When we say ‘burn fire’ we don’t mean take a match and light somebody, we are saying get rid of these things that are no good for humanity.”

In 2016, Anthony B release a new album, Tears Of Luv on his label Born Fire Music and collaborate with various producer around the world including Evidence Music on his track Life Good.

In May 2020, Anthony B released his 20th studio album titled “King In My Castle”.