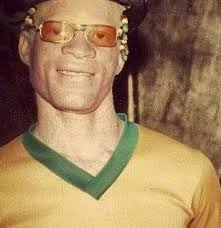 Winston Foster aka “Yellowman”was born on 15 Jan 1957 in Negril. An early target for abuse because of his albinism, he grew up in an institution in Kingston, with little to keep him company besides music. Influenced by early toasting DJs like U-Roy, he practiced rhyming and got a job with the Gemini Sound System as a substitute DJ. Christening himself Yellowman and dressing in a bright yellow suit, he peppered his lyrics with jokes about his skin color and outlandish tales of his sexual conquests. In 1979, he won a landslide victory at the well-known Tastee Talent Contest, and within months he had become one of Jamaica’s top concert draws, thanks to a dynamic, humorous stage show in which he often used the microphone to mimic his anatomical gifts.

Yellowman recorded prolifically in the early ’80s, at one point flooding the Jamaican market with more than 40 singles. His first full-length album, Them a Mad Over Me, was recorded for Channel One in 1981 and featured the hit title track and the single “Me Kill Barnie,” an answer record to Lone Ranger’s hit “Barnabas Collins.” He also scored with singles like “Operation Eradication” and the infamously slack “Shorties,” which Peter Tosh condemned as degrading to women.

Despite this success, Yellowman didn’t truly hit his stride on record until he hooked up with groundbreaking dancehall producer Henry “Junjo” Lawes. The 1982 LP Mister Yellowman kicked off their collaboration; released internationally by Greensleeves, it started to break him in the U.K. and U.S., and is still often acclaimed as his best album. It also launched a series of Jamaican hit singles over the next few years that included including “Yellowman Getting Married” (a rewrite of the My Fair Lady number “I’m Getting Married in the Morning”), “Mr. Chin,” “Who Can Make the Dance Ram” (a rewrite of “The Candy Man”), “Zungguzungguguzungguzeng” (sampled by several hip-hop acts), “The Good, the Bad, and the Ugly,” “Soldier Take Over,” “Nobody Move Nobody Get Hurt,” and “Wreck a Pum Pum,” among others.

After 1983’s Zungguzungguguzungguzeng album, Yellowman signed a major-label deal with CBS Records, which encouraged him to maintain the stylistic versatility of his previous work. However, his lone album for the label, 1984’s King Yellowman, sported mixed results, attempting everything from slack toasts to R&B and pop-tinged crossover tracks, including covers of “Sea Cruise” and “Take Me Home Country Roads,” and the much-maligned fusion attempt “Disco Reggae.” He subsequently released several albums on Shanachie, including 1984’s Nobody Move Nobody Get Hurt, 1985’s Galong Galong Galong, 1986’s Going to the Chapel, and 1987’s Don’t Burn It Down. The latter found him delving more into social consciousness; the title cut was a pro-marijuana protest, while “Stop Beat Woman” condemned domestic violence, and “Free Africa” criticized apartheid. Around the same time, he suffered a bout with throat cancer, but fortunately recovered. He returned to action with the hit Fats Domino cover “Blueberry Hill,” and moved to the Ras label to record the well-received Yellow Like Cheese album with producer Philip “Fatis” Burrell.

In 1982, Yellowman was diagnosed with skin cancer, and was initially told that he only had three more years to live. However, this prognosis proved to be inaccurate, and after several surgeries Yellowman was able to continue his career. The cancer went into apparent remission during this time. In 1986 it was diagnosed that the cancer had spread to his jaw; Yellowman underwent very invasive jaw surgery to remove a malignant tumor. This surgery permanently disfigured Yellowman’s face, as a large portion of the left side of his lower jaw had to be removed to successfully remove the tumor. Greatly shaken after this second life-threatening illness, Yellowman completely rethought his approach to music, and thereafter devoted himself almost exclusively to spiritual and social concerns.