Ronnie Tomlinson, Buju Banton’s publicist, told reporters that there has been an overwhelming response to Buju’s first Jamaican post-prison show, March 16 at Kingston’s National Stadium. It is his first performance in Jamaica since 2011. She said:

It’s an event that you do not want to miss. This show is a part of history in our culture. For so long, we’ve been hash-tagging ‘Free Buju Banton’ wanting him to be home and now he’s here, we’re going to give him the best celebration and welcome we know how to. He’s very ready to perform for us, to talk to us and just say thank you to each and everyone of his supporters. Rehearsals have been going well. All his friends are looking forward to joining him on this historic show. It’s just all building up really nicely at the moment.

Fans are reportedly coming in from Africa, Europe and Asia. Reggae In Seattle will have roving reporters attending this momentous event. 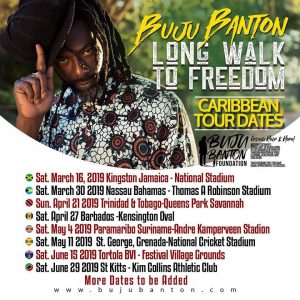 The March 16th show sets off Buju’s Long Walk to Freedom tour. Performances are expected in several other islands across the region, including The Bahamas, Barbados, British Virgin Islands, Trinidad and Tobago, Suriname, Grenada and St Kitts.