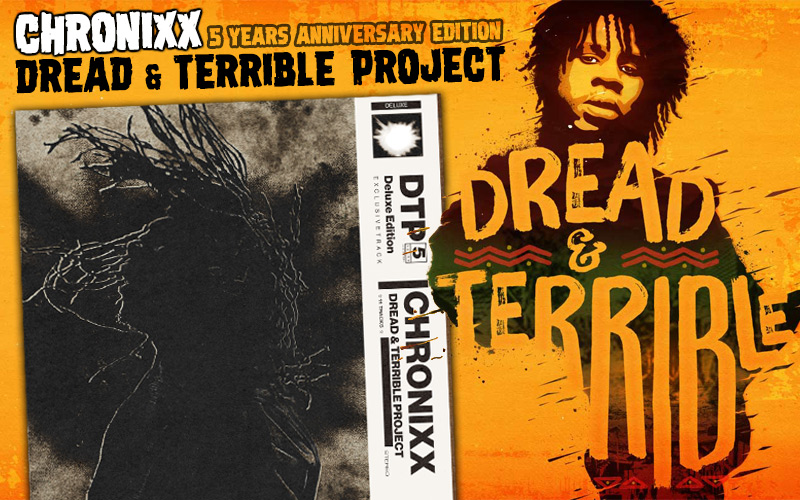 Jamar Rolando McNaughton aka CHRONIXX has released the deluxe edition of his seminal project, Dread & Terrible to celebrate its five-year anniversary.  Besides the classics such as Here Comes Trouble, Capture Land and Spirulina, the re-release contains the previously unreleased Jah Is There. The song was intended for Dread & Terrible, but did not make it in time for production.

Since Dread & Terrible broke into the Billboard Top 200 (#179) in August 2014 and topped the Reggae chart, Chronixx has become one of the most critically-acclaimed artists of the past five years while setting the tone for today’s generation of conscious reggae artists. He made his breakthrough television debut on The Tonight Show Starring Jimmy Fallon in the summer of 2014. It was a pivotal moment that introduced American audiences to his clever lyrics. He said:

[Musically] I was at a crossroads where I could’ve said ‘I want to be this artist or that type of artist.’ I think choosing to go this path and represent something that could benefit a lot of people positively was the main experience I [had].

The spotlight is back on Chronixx this week anchoring the remix to Ed Sheeran‘s I Don’t Care featuring Justin Bieber and Koffee. Together Chronixx and Koffee, the buzzing newcomer he has taken under his wing, put their Jamaican birthplace of Spanish Town on the world’s radar on Ed Sheeran‘s new summer anthem.

Through the celebration of this five year anniversary of The Dread & Terrible Project, Chronixx will be headlining both Uganda’s Pulse Jam Fest on June 29th, and the annual Reggae Sumfest concert in Montego Bay, Jamaica on July 19th.