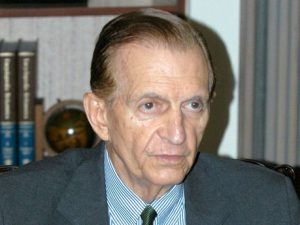 Former Prime Minister of Jamaica, Edward Seaga, who turns 89 on May 28, has been admitted to hospital in Florida in serious condition. His wife, Carla Seaga, issued a statement through Jamaica House on Thursday:

He is receiving excellent medical care and is sustained too by the love of his family and friends. We continue to pray for him and support him in his present stable environment.

She went on to say said that her husband will continue to receive treatment at the facility where he has been admitted. While the release did not clarify the nature of his health challenge, a source close to the family said the former Jamaica Labour Party (JLP) leader is being treated for cancer.

Seaga, who served as Jamaica’s fifth Prime Minister, famously won a landslide victory over Michael Manley’s People’s National Party (PNP) in the hotly-contested October 1980 General Elections on his ‘deliverance’ agenda. The JLP comfortably remained in office for nine years, as the PNP boycotted a snap election that was called by Seaga in 1983.

Seaga is the last surviving member of the framers of the Jamaican Constitution. He served as JLP leader for 31 years, and as Member of Parliament (MP) for West Kingston for 43 years, from 1962 until his retirement in 2005, the longest ever by a Jamaican politician.

His retirement from active politics marked the end of an era, as he was the last of Jamaica’s serving politicians to have entered public life before independence in 1962, him having been appointed to the Legislative Council (now the Senate) in 1959.

On his retirement from active politics in January 2005, he was appointed honorary distinguished fellow at the professorial level at the University of the West Indies (UWI).