Out of the colonial experience of Jamaica a new religion emerges. The early Hindu connection to the Rastafari movement came by way of Indians coming to Jamaica through the British coolie trade to work on the sugar plantations, bringing with them their Hindu traditions. In this case the Hindu Sadhu (Indian holy men) came into contact with Afro-Jamaicans who picked up on the Sadhu’s lifestyle of wearing matted hair (dreadlocks), vegetarianism (Ital food), and marijuana smoking (brought over by Indian coolies, Ganja is a Sanskrit word for marijuana). These things later found their way into the Rastafari movement. 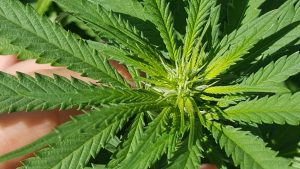 The use of ganja is often cited by Rastas as a religious sacrament and is mentioned in the following Bible verse:

“He causeth the grass to grow for the cattle, and herb for the service of man,
that he may bring forth food out of the Earth.
-Psalms 104:14 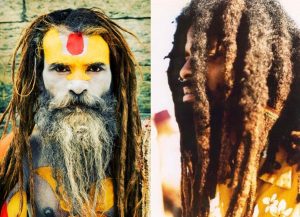 The wearing of dreadlocks for the Rastas, did not only come from Indian influence but also from Kenyan revolutionary influence, the Mau Mau, who wore dreadlocks as a sign of resistance against European colonial culture imposed on Africans. Rastas believe that King Solomon wore dreadlocks as indicated in this Bible verse:

“During the entire period of their Nazirite vow, no razor may be used on their head.
They must be holy until the period of their dedication to the LORD is over;
they must let their hair grow long.”
-Numbers 6:5 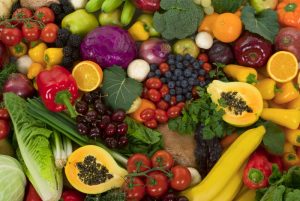 Vegetarianism (Ital Livity). A common tenet of Rastafari beliefs is the sharing of a central Livity among living things, and what is put into one’s body should enhance Livity rather than reduce it. it is also mentioned in the Old Testament verse:

“I have given you every herb bearing seed, which is upon the face of all the earth,
and every tree, in the which is the fruit of.”
– Genesis 1:29