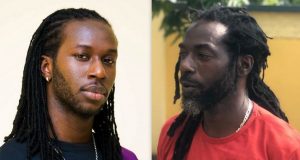 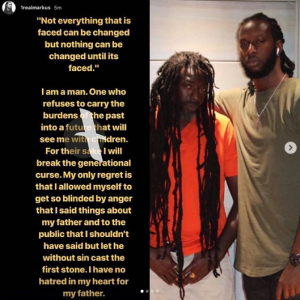 In the days leading up to Buju Banton’s comeback concert “Long Walk To Freedom” tension was rising between the singer and his son, producer Markus Myrie, over Buju’s dislike of Markus’ rumored romantic involvement with dancehall artist D’Angel. It is reported to have culminated in an physical altercation last week at Gargamel Music Studios in St Andrew, with a police report for assault filed against Buju with the Constant Spring Police. Markus had taken shots at his father on social media with posts like: 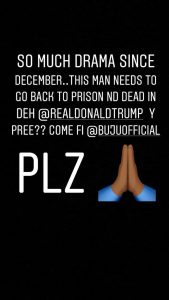 SO MUCH DRAMA SINCE DECEMBER.. THIS MAN NEEDS TO GO BACK TO PRISON NO DEAD IN DEH @REALDONALDTRUMP Y PREE?? COME FI @BJUJUOFFICIAL 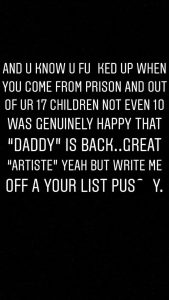 AND YOU KNOW YOU F**KED UP WHEN YOU COME FROM PRISON AND OUT OF YOUR 17 CHILDREN NOT EVEN 10 WAS GENUINELY HAPPY THAT “DADDY” IS BACK. GREAT “ARTISTE” YEAH BUT WRITE ME OFF A YOUR LIST PU**Y. 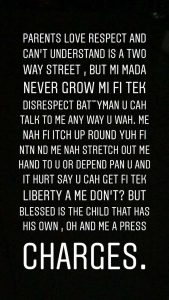 PARENTS LOVE RESPECT AND CAN’T UNDERSTAND IS A TWO WAY STREET, BUT ME MADA NEVER GROW ME FI TAKE DISRESPECT BATTYMAN YOU CAH TALK TO ME ANY WAY YOU WAH,” HE WROTE. “ME NAH FI ITCH UP ROUND YUH FI NOTHING AND ME NAH STRETCH OUT ME HAND TO YOU OR DEPEND PAN YOU AND IT HURT SAY YOU CAN GET FI TEK LIBERTY A ME DON’T? BUT BLESSED IS THE CHILD THAT HAS HIS OWN, OH AND ME A PRESS CHARGES

He ended the online onslaught with, a now-deleted, post:

DAWG…. HOW THE F**K YOU FI FEEL WHEN YOU FIND OUT YOUR FATHER @BUJUBANTON THE MAN WEH SING BOOM BYE BYE, A ONE A D BIGGEST BATTYMAN INNA JAMAICA

During Saturday’s concert at Kingston’s National Stadium, Buju addressed the gay allegations made by his son.

Me come home and some bwoy no know say even though Buju Banton lockup we still rough. 8 years 6 months, 27 days, 13 hours, 5 minutes and 26 seconds. Am gonna say this is a disclaimer. No disrespect to no one, am talking about me.

He then burst into song regarding the rumors:

We all hope and pray that the father and son can overcome their tense relationship and come together in One Love.