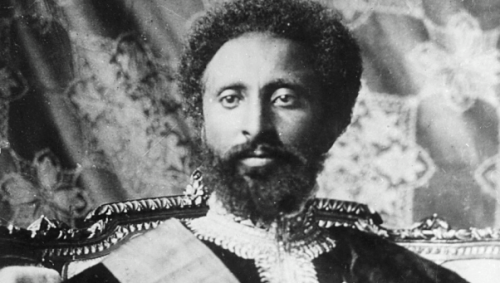 On this day, 12 September in 1974, the Emperor of Ethiopia, Haile Selassie, was deposed from power after a forty-four year reign. Born as Lij Tafari Makonnen in Ejersa Gora in 1892, his family boasted a lineage going back to King Solomon and family ties to Emperor Menelik II, under whose care the young Tafari was taken when he was fourteen years old.

He demonstrated an aptitude for politics in roles as a provincial governor, which established his reputation as a progressive reformer. In 1916, Tafari removed Menelik’s unpopular successor from power, and became regent for Menelik’s daughter, the new empress. Tafari was a popular figure in Ethiopia, symbolizing the reformist hopes of young Ethiopians with his modernizing outlook.

He was keen for Ethiopia to work with Western powers, and in 1923 secured Ethiopia’s admission into the League of Nations. In 1928, Tafari had himself appointed king, and, after the death of the empress in 1930, was crowned Ethiopia’s 225th emperor, taking the imperial title of Haile Selassie (meaning ‘Might of the Trinity’). As emperor, Haile Selassie enacted a series of reforms improving Ethiopia’s schools and police force, abolishing slavery, and introducing a new constitution guaranteeing equal rights.

During World War Two, the emperor was responsible for securing British aid in ousting Mussolini’s Italian forces from Ethiopia. Despite a degree of popularity, boosted when he secured Ethiopia a spot in the United Nations, by the 1970s famine, unemployment, and a host of other issues fostered discontent with Haile Selassie’s autocratic rule. Ethiopia’s final emperor was ultimately ousted in a military coup in September 1974, which erupted out of a pay dispute, and led to the establishment of a Marxist military government. Haile Selassie was kept under house arrest until his death a year later aged eighty-three at the hands of agents of the new government.