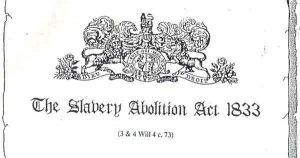 28 August 1833 the “Slavery Abolition Act 1833” abolished slavery in parts of the British Empire. This Act of the Parliament of the United Kingdom expanded the jurisdiction of the Slave Trade Act 1807 and made the purchase or ownership of slaves illegal within the British Empire, with the exception of “the Territories in the Possession of the East India Company”, Ceylon (now Sri Lanka), and Saint Helena.

By 1783, an anti-slavery movement to abolish the slave trade throughout the Empire had begun among the British public. Spurred by an incident involving Chloe Cooley, a slave brought to Canada by an American Loyalist, Lieutenant-Governor of Upper Canada John Graves Simcoe tabled the Act Against Slavery in 1793. Passed by the local Legislative Assembly, it was the first legislation to outlaw the slave trade in a part of the British Empire.

In 1807, Parliament passed the Slave Trade Act of 1807, which outlawed the international slave trade, but not slavery itself. In 1823, the Anti-Slavery Society was founded in London. During the Christmas holiday of 1831, a large-scale slave revolt in Jamaica, known as the Baptist War, broke out. It was organized originally as a peaceful strike by the Baptist minister Samuel Sharpe. The rebellion was suppressed by the militia of the Jamaican plantocracy and the British garrison ten days later in early 1832. Because of the loss of property and life in the 1831 rebellion, the British Parliament held two inquiries. The results of these inquiries contributed greatly to the abolition of slavery with the Slavery Abolition Act 1833.

Sugar planters from rich British islands such as the Colony of Jamaica and Barbados formed a body of resistance to moves to abolish slavery itself. This West India Lobby, which later evolved into the West India Committee, purchased enough seats to be able to resist the overtures of abolitionists. However, The Reform Act 1832 cleared the way for a majority of members of the House of Commons to push through a law to abolish slavery itself throughout the British Empire.

The Act had its third reading in the House of Commons on 26 July 1833 and received the Royal Assent a month later, on 28 August.