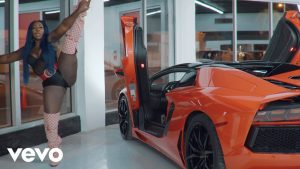 Grace Latoya Hamilton aka SPICE takes the artistic step of releasing two videos for her new hit song “Genie”. The videos were directed by Xtreme Arts and Spice herself.

Video one plays off the story of Aladdin with the magic lamp: a man walking on the beach with his girlfriend sees a shiny object in the sand which turns out to be a magic lamp. After rubbing it, Spice and her dancers emerges and starts seducing the man.

In video two, Spice showcases her twerking skills alongside her female dancers.

The single “Genie” is featured on Spice’s new mixtape “Captured”, now available on all streaming platforms.