BOUNTY KILLER posted a picture of himself on Instagram from one of his recent interviews announcing that a VYBZ KARTEL documentary has been in the works for some time. He did not elaborate on the details of the film but said:

Bounty Killer and Vybz Kartel are currently enjoying the best relationship they have had in over a decade. The two dancehall giants regularly display their mentor-protégé-like relationship on social media. The story of the impending documentary ignited the fan base who started requesting details but Grunggaadzilla has remained tight lipped. 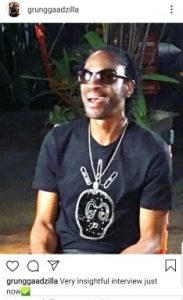 The Fox 5 News story on Vybz Kartel helped to push the film’s producers to finish it earlier than planned. Kartel’s pending appeal verdict is said to also influence the film’s release date. Details whether Vybz Kartel will make an appearance in the documentary from behind bars are not available as yet, but sources say that he signed off on the film and is excited about it.